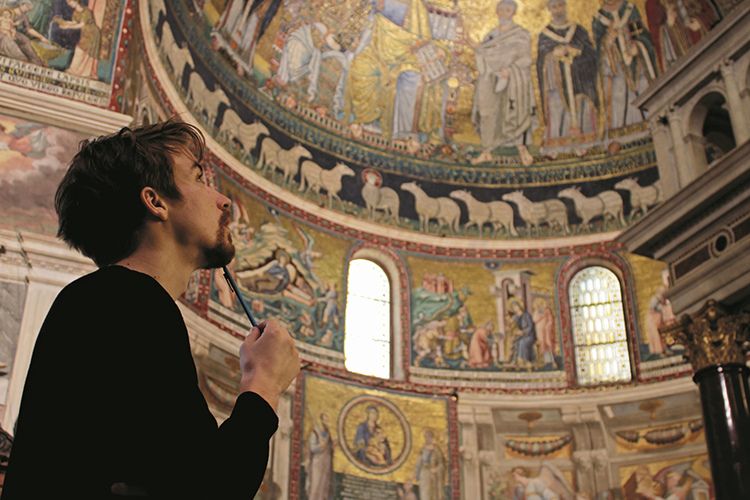 The Renaissance was an art movement that emerged in Italy around the late 14th century, reaching its height between the late 15th and early 16th centuries. This tradition produced some of the most important masterpieces in the history of Western art, inspiring countless artists and movements after it.

Studying art history in the Eternal City can place you amid endless inspiration and excitement. John Cabot University offers a specific course on Renaissance Rome and its Monuments, in which students can learn both theoretically and practically by participating in on-site classes. Read on for three reasons why you should study art history in Rome at JCU if you want to learn about Renaissance art.

Witness the Incredible Ceiling of the Sistine Chapel

The ceiling of the Sistine Chapel is one of the most enduring works from the Renaissance period, and you can see it with your own eyes while you study in Rome.

In JCU’s art history class on Renaissance Rome and its Monuments, students journey directly to the Sistine Chapel to study the ceiling in person and learn about its intriguing historical context. Pope Julius II commissioned Michelangelo to paint it between 1508 and 1512, which was a risky move. The artist was known for his statues at the time, rather than his paintings.

Nonetheless, the risk that Pope Julius II took paid off. Today, nearly 500 years later, the ceiling of the chapel is covered in awe-inspiring, incredibly beautiful works based on several scenes from the Old Testament. Michelangelo painted representations of the creation of the world, the creation of Adam, the expulsion from the Garden of Eden, and Noah’s Ark. To frame the scenes, he ingeniously painted fake supporting statues and architectural molding.

Visit the Last Judgement While You Study Abroad

Another beautiful work by Michelangelo, the Last Judgement, is one of the most famous paintings of all time. Commissioned by Pope Paul III in 1534 towards the end of the Renaissance period, this huge painting contains over 300 intricately muscular figures in a variety of poses.

While you study for your art history degree in Rome, you can see this painting, and students in JCU’s art history class on Renaissance Rome will take trips to the Vatican Museums during modules on Michelangelo’s great works, to analyze this painting for themselves.

While you study abroad, you can visit the beautiful Villa Farnesina, a building of international renown for its significance in Renaissance art history. This suburban villa is located in the district of Trastevere, near John Cabot University’s campuses, specifically the Guarini Campus. It was initially designed for Agostino Chigi, the banker and treasurer of Pope Julius II. JCU’s art history class on Renaissance Rome conducts an onsite visit to the beautiful Villa Farnesina to school students in the artistic significance of the works it contains.

The building is known for its odd and resplendent architectural style, as well as for the world-famous frescoes that decorate its interiors. These frescoes were designed by several artists, including a key figurehead of the art movement, Raphael. In 1517, Raphael collaborated with his pupils to paint the ground floor of the villa with frescoes depicting the myth of Psyche.

Do you want to go to Rome to study art history?

Explore Cultural Landmarks With a Master's in Art History in Rome