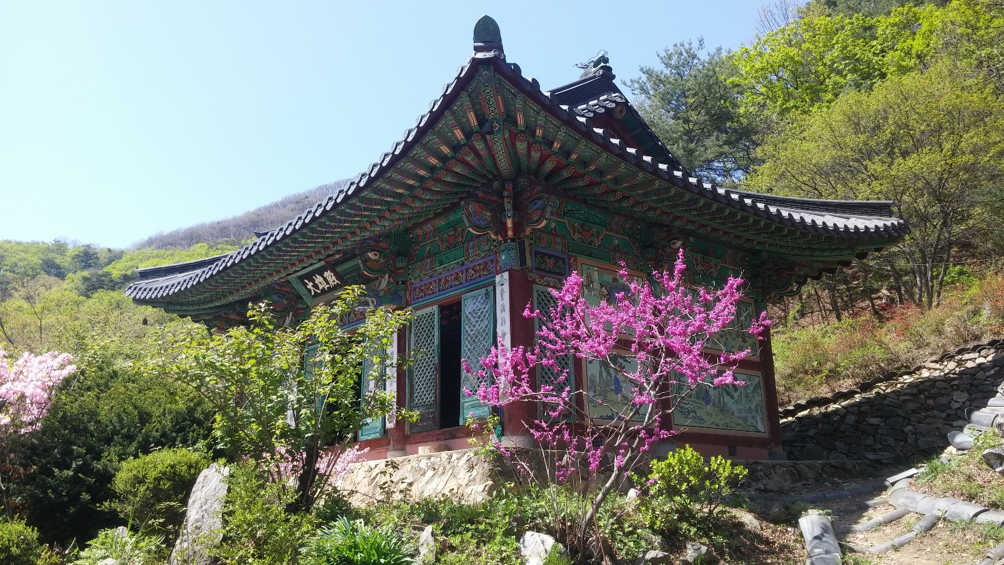 Korea’s national sport is hiking (등산하다). I was lucky enough to find some hiking-geeks among my friends who pushed me to rediscover that activity. Just north of Seoul is the fabulous park of Bukhansan (북한산) with its many peaks, where I went hiking several times. 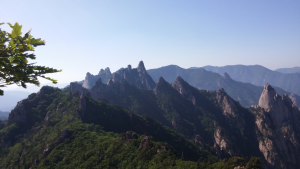 The landscape there is breath-taking and the paths are both challenging and exciting. We also explored other hiking venues: east of Seoul, mount Samaksan (삼악산); the sacred mount Manisan (만이산) on an island – sacred because Korea’s mytical founder Tangun is said to have sacrified to the gods there; the beautiful park of Seoraksan (설악산) on the east coast. Each trip yielded an indescribable sense of satisfaction which paid off hours of sweating, panting and leg pain.

As I mentioned, Buddhism was the first major collective religion of Koreans (if one excludes the many local shamanistic cults). 30% of Koreans practice Buddhism still today, and such a popularity allowed the many temples of Korea to survive years of Confucian oppression. I visited many of them, the most remarkable being Bulguksa (불국사) which exists since 751 AD in the ancient capital of Gyeongju (경주), and Seokguram (석구람), a temple carved in the rock. There are temples by the sea, and little ones on many mountains – even one in the middle of a vertical rock wall in Seoraksan park! 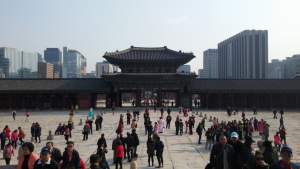 I did a two-day ‘temple-stay’ at Hwagyesa temple (화계사) in northern Seoul with my family, who travelled all the way over from Italy to visit me in March. It was an illuminating experience to understand how Zen monks and worshippers live, pray, eat and think. One of the most special moments of my semester in Seoul took place while we were resting, when a Western-looking monk approached my family and me and invited us for a tea. We then discovered that he had a Sicilian girlfriend before going to South Korea, when he decided to become a monk. He said his past had pushed him to interact with us and recall that period of his life. Then my father asked to explain what Buddhism really is; the monk replied, “Sit down and answer this question with your mind: ‘Why is the sky blue?’ and then ‘What is the sky?’, and then ‘What is blue?’, ‘What is a color?’, ‘What is sight?’, and so on, for any simple or existential question. This is Buddhism.”

Other remarkable trips around Korea were the following:

I often hear people saying, at the end of a study abroad experience, “This is my true home.” I can’t agree with that. Even though I lived in Korea and I might still live abroad in the future, I am already too Italian to change my idea of ‘home’. My favorite book, “The Leopard” (“Il Gattopardo”), explains that when one is twenty, it is too late to change this feature (“A vent’anni la scorza è già fatta.”). But although it’s not my home, Korea is now part of me. I know just a fraction of its culture and its people, but I think I can understand it and appreciate it. And I will treasure this Korean part of me throughout the journey of my life.

The opportunity to discover such a precious gem of our world was truly a pleasure, and it’s been an honor to follow in Marco Polo’s footsteps and travel all the way to the opposite side of Eurasia, to the “country of the morning calm”, as it was known, which today is also “the country of futuristic innovation.”