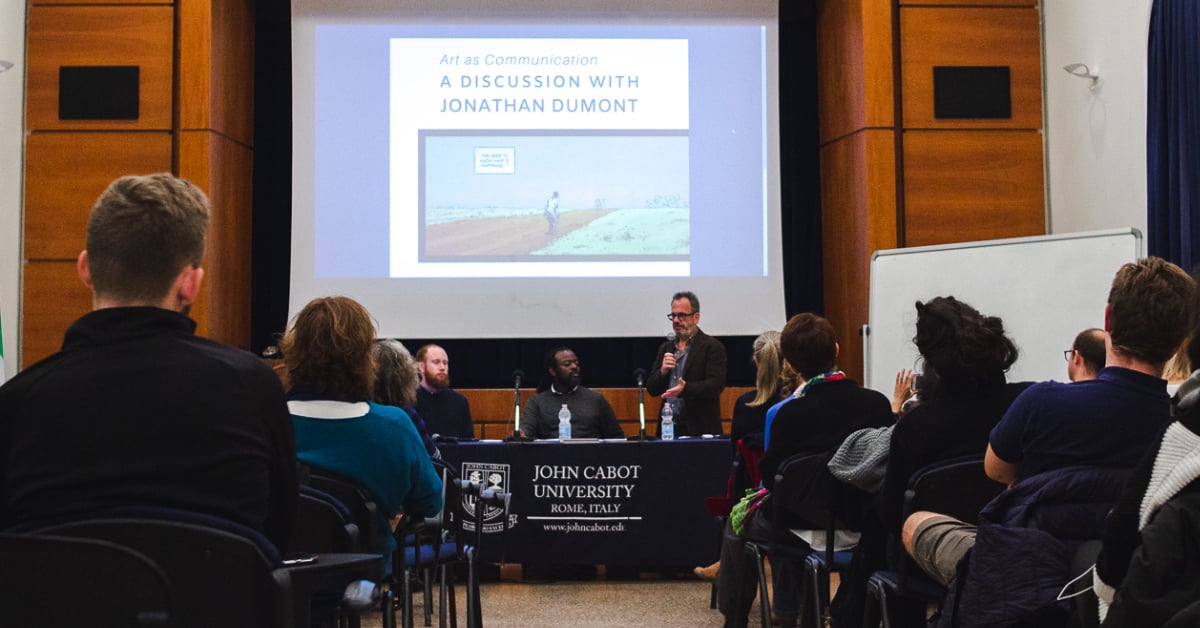 The Communications department has carefully curated its curriculum to ensure that you’re properly equipped with a variety of tools to allow you to succeed in a globalized media environment. The department encourages intellectual development and cross-cultural encounters in an environment that is a microcosm of global communications. This ensures that students are prepared to interact in the changing world of digital media.

Among the many university-wide activities that the Communications department organized was their world-class lecture and film series “3-D: Digital Delights and Disturbances”, which featured scholars, artists, and media makers. Read on for a closer look at the topics that were explored!

Back in April, the Digital Delights and Disturbances Series included a lecture titled From Hybrid Learning to Zoom Fatigue: Logging on and Checking out. This lecture was delivered by guest speakers Gabriella Coleman, Geert Lovink, and Shannon Matterns, along with Communications professor Donatella Della Ratta, who moderated the lecture.

The speakers discussed their experiences teaching remotely through online platforms. In particular, Coleman spoke about the feeling of disorientation she experienced when teaching online, and the sense of “imposter syndrome” she feels she developed.

Mattern spoke about the new dimensions added to the class. She feels remote learning allows students who may be more reserved or uncomfortable speaking in front of the class to come out of their comfort zones and participate, whether it be through speaking on zoom or using the chat function.

Other concerns of classes being recorded include losing a valuable connection with students who watch recordings rather than attend classes live due to time constraints or time zones.

In November, the Communications Department at JCU welcomed Ben Little and Alison Winch as guests for the series, both lecturers at the University of East Anglia and authors of The New Patriarchs of Digital Capitalism: Celebrity Tech Founders and Networks of Power. Ben Little is a co-author of several books and Alison Winch is the author of many publications on gender and media.

Their lecture, titled The New Patriarchs of Digital Capitalism: Celebrity Tech Founders and Networks of Power, discussed the billionaires behind the major tech companies in the United States. They spoke about the power and influence these people have, as well as their role in digital capitalism. Little and Winch made references to the “patriarchal network” - which includes the likes of Jeff Bezos, Elon Musk, Mark Zuckerberg - and its connection to the different myths of the American Dream such as the notion of the “Boy Genius”.

On March 30th, the John Cabot Student Government, along with international students in Italy, joined the Queer Dada lecture. It was a celebration of the creativity and queerness of Dada. Dada, or Dadaism, is a movement against European avant-garde art in the early 20th century. The idea is to protest against capitalism, violence, and nationalism by emphasizing irrationality in the works of its artists.

There were live performances by queer, non-binary, and transgender people from different nations. The idea was to create a space to allow people to come together beyond their cultural boundaries. The performances were live-streamed on JCUTV. The themes they spoke about included society’s imposition of gender roles, the invisibility of queer people, and the life consequences for people who did not identify with the traditional gender binary.

STAND Book Fundraiser: The Mission of the JCU Community

Consider Joining the Grassroots Club When You Study in Italy

Get Involved in Student Leadership at Our University in Rome