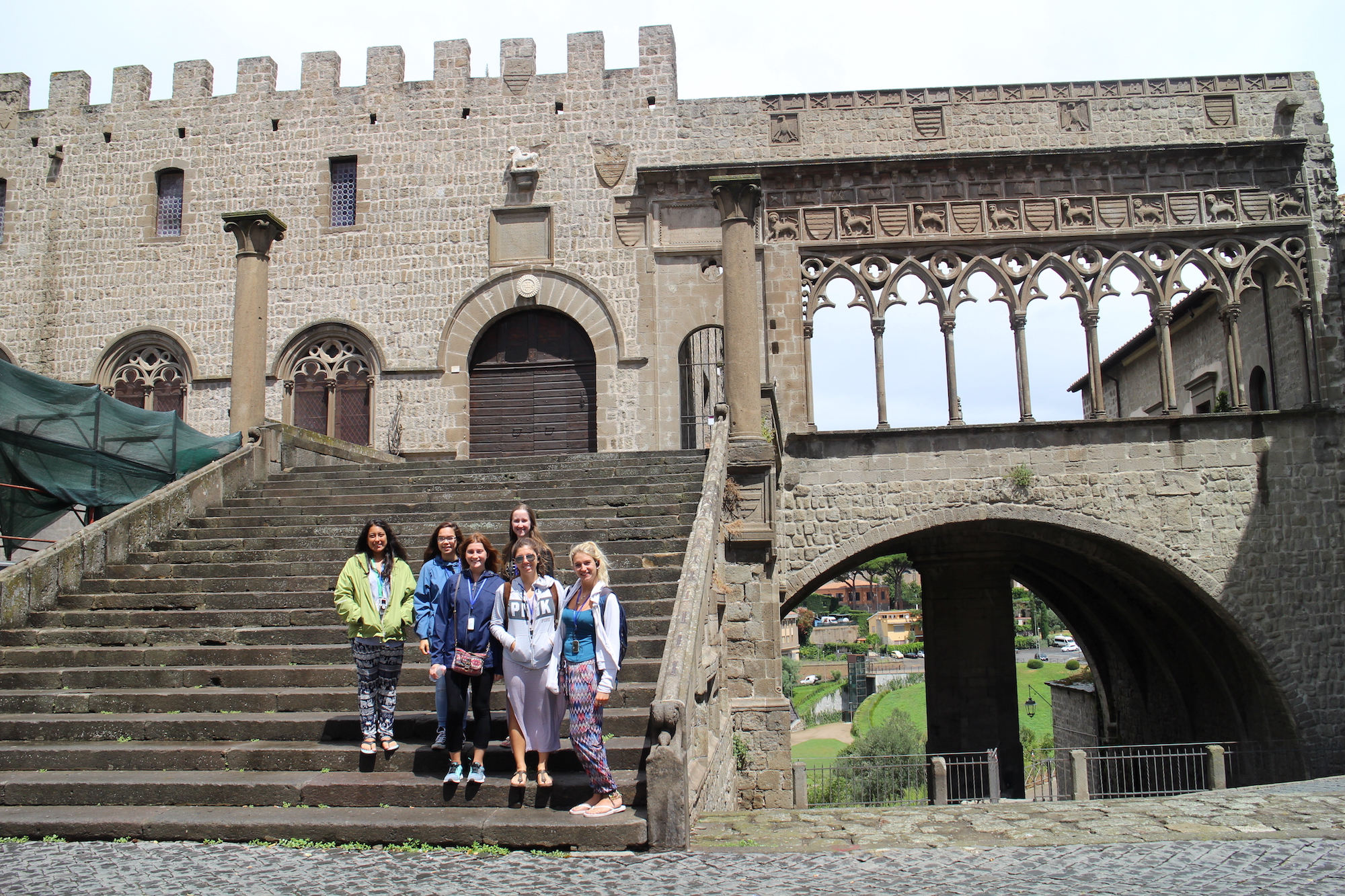 Summer sessions at John Cabot University offer more than just five weeks of classes at our Roman campus: study abroad students also have access to cultural trips and activities with JCU's Student Services team. JCU recently took our summer II students on a trip just outside of Rome to explore the medieval town of Viterbo.

Even though the town dates back to 773AD, Viterbo is known for being the home of the first Papal conclave in the thirteenth century.  The guide explained that the term “conclave” comes from the Latin meaning “with a key,” since the Cardinals were literally locked in the Papal loggia until they decided on the next Pope. The deadlock outraged the inhabitants of Viterbo because their taxes supported the 3-year long proceeding: the longest conclave in history. In protest, the city first locked the cardinals in the loggia, then they reduced their rations of food to just bread and water, and finally the entire roof of the building was removed until they chose the Pope Gregory X in 1271.

The students were also able to see Saint Lawrence Cathedral which is situated right next to the Papal Palace where the famous first conclave occurred. The cathedral was originally constructed in the 12th century but went through various renovations, most recently after World War II. The cathedral was barely saved from a Nazi bombardment when, luckily, a bomb fell directly on a solid support beam on the roof. It bounced off and exploded in the square next to the church instead of inside it. Although the cathedral remained intact, the reverberations from the bomb did cause some superficial damage inside the building and we can still see the gauges in the marble pillars and floor where chunks of the ceiling fell.

Additionally, the students learned about Viterbo’s important festival celebrating Santa Rosa, which takes place each September. During this festival, a large group of facchini, or porters, carry the “macchina di Santa Rosa”, a statue reaching 60 feet in height and weighing 5 tons, from one end of the city to the other.  The journey is so dangerous that the facchini are given last rights before they take part in the transportation of the macchina.

The Palazzo dei Priori, or the City Hall, is filled with frescos from the Mannerist period. This means that the frescos were painted to trick the eye. One particularly remarkable aspect is a fake door with a man peering out, which the students learned was a typical trick used to create symmetry in a room.  Local government leaders meet here to this day, sitting on the same furniture and in the same room that they have used for hundreds of years.

After learning about these sites and traditions in Viterbo, the students stopped at the historic café, Gran Caffè Schenardi, where they enjoyed a buffet lunch of typical Italian dishes including dessert.

The afternoon was spent relaxing at Terme dei Papi, or the Papal Thermal Baths. The students were able to benefit from the rejuvenating properties of the mineral water. Even though it was cold and rainy in the morning, the sun did come out just in time for the students to take a dip.